Can you imagine a roundtrip flight between California and the Philippine capital of Manila taking fifteen days? In 1935, the first scheduled transpacific airmail flight took eight days to reach Manila from Alameda, with stops in Honolulu, Midway Atoll, Wake Island, and Guam. After leaving Alameda on November 22, and landing in Manila, on November 29, the China Clipper started its long journey back to the United States on December 2. The trip took another four days to travel back to Alameda and landed #onthisday [Dec. 6] in 1935. The entire roundtrip flight time was 123 hours and 12 minutes. It had covered over 16,000 miles and set nineteen world records. Learn more about early transpacific aviation in "China Clipper" on display, pre-security, in the Aviation Museum. http://bit.ly/chinaclipper Image: Pan American Airways, Martin M-130 “China Clipper”, c. 1939, Gift of William T. Larkins. 2010.248.012

This post was tagged #ChinaClipper and #aviationhistory and #avgeek and #panam 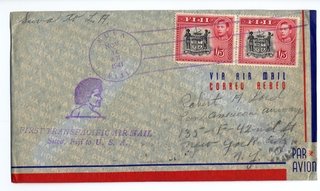