The Sikorsky S-40 was developed in response to requests from Pan American Airways’ president Juan T. Trippe for a high-capacity flying boat. With a cabin capable of carrying thirty-eight passengers, it was nearly double the capacity of the Consolidated Commodore, the airline’s next largest flying boat. Only three were built, and they were the first of the airline’s “Clippers.” The cabins were spacious and luxuriously appointed with mahogany paneling. Pan American Airways introduced S-40 service in 1931, and was first piloted by Charles A. Lindbergh on its Miami–Barranquilla route. Although the aircraft served the airline well during the 1930s, it was noted for its lack of aerodynamic efficiency due to its many struts and support wires. Lindbergh famously referred to the aircraft as a “flying forest.” See "Aviation Evolutions: The Jim Lund 1:72 Scale Model Airplane Collection", which features more than 200 models, on display, pre-security, in the Aviation Museum. http://bit.ly/AviationEvolutions 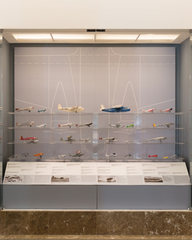 Image by SFO Museum. It was taken on Oct 2, 2017.
Aviation Evolutions: The Jim Lund 1:72 Scale Model Airplane Collection
This aviation exhibition was on display between September 2017 and March 2019 in the San Francisco Airport Commission Aviation Library and Louis A. Turpen Aviation Museum gallery, located in International Terminal