The first flight of the Boeing 247 took place #onthisday in 1933. In the early 1930s, Boeing Aircraft and United Air Lines worked together to produce a remarkable airplane that revolutionized air travel. This streamlined, twin-engine transport featured all-metal construction, retractable landing gear, and seating for ten passengers. With a cruising speed of 188 mph, the 247 was faster than the U.S. Army’s most modern fighter at the time. When it was introduced, the Boeing 247 cut the travel time from New York to San Francisco by over a third to about twenty hours. For the first time, passengers could fly coast-to-coast in less than a day. Considered the first airliner, the passenger cabin was larger and quieter and every flight was crewed by a pilot, a copilot, and a stewardess. In 1933, one satisfied United customer wrote, “the new Boeing planes far surpass anything I have seen in the air for comfort and expedition.” Image: Roy Andersen, United Air Lines, Boeing 247 postcard, 1973. Gift of United Airlines Archives. 2005.008.092 . . . 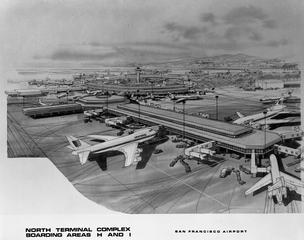